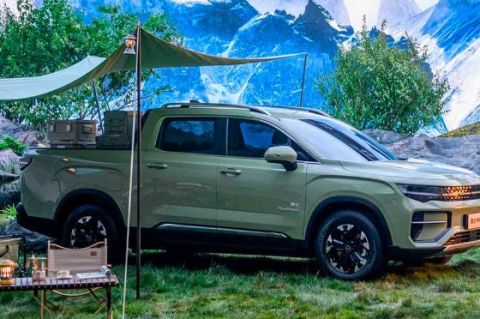 Zhejiang Geely Holding Group, a Chinese automotive manufacturer headquartered in Zhejiang province’s capital city of Hangzhou, has announced that the Radar RD6 electric pickup will enter production in the fourth quarter (Q4) of 2022.

The Radar RD6 is a midsize pickup truck that is the Geely’s first electric model of an upcoming lineup, which will include electric trucks, sports utility vehicles (SUVs) and all-terrain vehicles (ATVs). All Radar Auto models, including the aforementioned RD6 electric pickup truck, will be underpinned on the company’s EV-dedicated Sustainable Experience Architecture (SEA).

The use of the EV-dedicated SEA platform has also enabled engineers and designers to maximize space. The upcoming electric pickup will likely have a front trunk under the hood as well as a spacious interior. As far as dimensions are concerned, the pickup will reportedly be similar in size to Toyota Hilux midsize pickup truck.

In China, pickups come under a niche segment where they are mostly used by farmers. It is quite surprising to note here that pickups are still banned from most urban roads in China, in spite of several trials of providing them entry to select areas in select cities. Nevertheless, Geely decided to produce and sell an electric pickup truck because pickup sales made up around 2 per cent of China's auto sales in 2021, and it is expected to grow in the coming years. In fact, growth rate of pickups is outpacing that of other segments, including sedans and SUVs.

When asked for a comment, Radar Auto CEO Ling Shiquan said, “More people are pursuing a healthy lifestyle with more outdoor activities while the governments are also relaxing restrictions for pickups in cities. Those changes are supporting the growth of pickup trucks.”

While the automaker hasn’t revealed the Radar RD6’s performance figures, the SEA platform of the vehicle is expected to give the RD6 considerable technology underpinnings, including single and dual motor options. Some recent media reports suggested that the RD6 electric pickup’s powertrain will be capable of producing up to 400 horsepower (hp) and a maximum range of 600 kilometers or roughly 373 miles (on CLTC cycle) between two charges. However, such reports should be taken with a pinch of salt as the manufacturer hasn’t confirmed the vehicle’s performance figures.