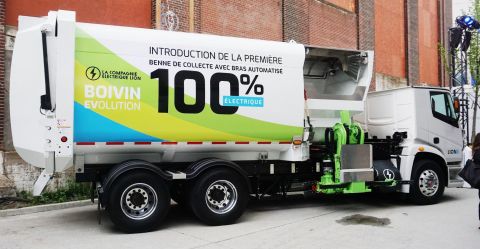 Chinese automaker BYD -- the automotive subsidiary of Chinese multinational firm BYD Co Ltd -- has delivered nine units of its T8 electric garbage trucks in Brazil. The trucks have been delivered to the Comlurb waste management company in Rio de Janeiro.

The nine T8 electric truck units which BYD has delivered to Comlurb will be used by the cleaning company for waste collection purposes. The details related to the purchase costs of the nine electric trucks have not been officially disclosed either by BYD or by Comlurb.

The fleet of nine BYD electric trucks will apparently be the manufacturer’s biggest electric truck fleet outside China. In addition to these nine trucks, BYD will also deliver six more units of electric trucks to Comlurb within the next six months. Subsequently, five more units will be delivered by end-2020.

The BYD T8 electric garbage trucks have already been tested extensively by Comlurb. The trucks have 15 cubic meter storage capacity, and a driving range of nearly 200 km. The driving range implies that, under normal traffic conditions, the electric trucks can operate for around eight hours without requiring a battery recharge.

The electric garbage trucks come with a regenerative braking system, which enables them to generate electricity by recuperation when rolling out and driving downhill. Moreover, the noiseless drive of the electric trucks makes them suitable for night journeys in residential areas.