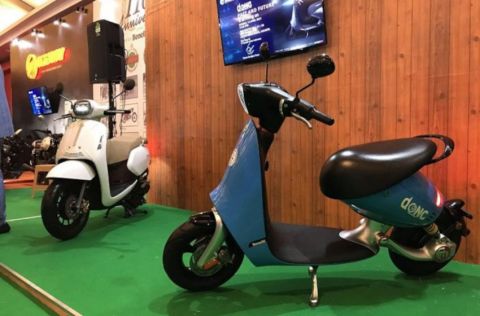 Many two-wheeler manufacturers, including well-established companies like Honda and Yamaha, have come out with little electric mobility two-wheelers but the Benelli Dong features an entirely new design and futuristic look.

The lightweight electric scooter Dong sports a 1,200 W hub motor in a single-sided rear swingarm, which draws a removable 60V 26Ah lithium-ion battery which is located under the seat of the EV. The battery has a capacity of 1.56 kWh. It seems to be quite small in capacity, but it is enough for urban commute as it roughly twice the power or battery capacity of a typical electric bicycle (e-bike) in the West.

The manufacturer has rated the two-wheeler’s battery for around 60 km (roughly 36 miles) of range on a single charge. While it is not much for longer trips, it is enough for most urban commuters who do not need more than that for every day chores within the city.

The Benelli Dong has a top speed of 45 km/h (28 mph), which is perfect for city drive. In Europe, it would fit in the L1e class of vehicles. It means that it would not require a special motorcycle license.

Weighing just 74 kg (163 lb), the Dong strays from the archetypal cheap scooter design. It instead features a floating rear, which is a welcome update considering a flood of repetitive electric scooter designs.

In addition to all those attractive features, the new electric scooter is affordable as well. In its debut market of Indonesia, it is available for Rp. 36,900,000 (US$2,545).

The new electric scooter seems to be quite small, but it is perfect for those who are looking for an environment-friendly, zero emissions personal mobility solution for daily commute. Moreover, a plethora of small and lightweight electric scooters available in the market has proved that size does not matter much.

The Italian manufacturer has launched the Dong with a special focus on Eastern customers, but one can’t rule out the little electric scooter’s worldwide launch as the manufacturer has a worldwide market and small electric two-wheelers are becoming more mainstream in the Western markets as well.