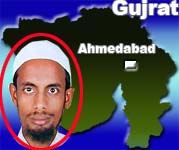 Ahmedabad, Aug 19 : The alleged mastermind of the serial blasts in Ahmedabad, Mufti Abu Bashir, has admitted that he was involved in the July 26 bombings that left
55 people dead.

Bashir, whose arrest was announced on August 16, is currently in 14-day police custody and being grilled by the city Crime Branch officials.

“So far in his interrogation, he has confessed to his involvement in the Ahmedabad blasts,” Crime Branch sources said.

“Though Bashir is cooperating in interrogation, he is not revealing much details. He is just giving short replies to the questions asked by the officials. Most of his replies are in yes and no,” they said.

He has, however, not said anything about his suspected involvement in the Jaipur and Hyderabad blasts, the officials said.

Bashir had been a madrasa teacher in Hyderabad, where he came in contact with the hardline SIMI faction led by Safdar Nagori.

After Nagori''s arrest in March 2008 in Madhya Pradesh, Bashir took up the task of carrying out the Ahmedabad blasts, police had said earlier.

Bashir had stayed for two months in a rented house in Ahmedabad''s Vatva locality which he made his base to plan and execute the blasts, police said.

It was Bashir who had briefed other SIMI activists before the blasts. Police said these meeting were held in Bapunagar and Juhapura areas.

After the explosions, Bashir left for his home in Azamgarh district of Uttar Pradesh. A joint team of police in Gujarat and Uttar Pradesh had nabbed him from his residence.

Top SIMI leader Safdar Nagori, a key conspirator in the Ahmedabad blasts and may be involved in Jaipur and Hyderabad terror strikes, Gujarat police said on Tuesday, Nagori and some of his close associates were arrested from Indore in March.

They also claimed that Mufti Abu Bashir, alleged mastermind of the July 26th Ahmedabad blasts, who was arrested from Uttar Pradesh, has "confessed" to his involvement in the serial explosions.

Throwing fresh light on the probe, they alleged that Nagori and his brother Karimuddin were main trainers during SIMI''s training camps in Kerala (December 2007) and Halol in Gujarat (January 2008).

Gujarat police has decided to seek the custody of Nagori from Madhya Pradesh police and is likely to bring him to Ahmedabad for questioning, he said. (ANI)