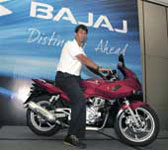 Bajaj Auto plans to take legal action against TVS Motors for infringing its patented technology.
Bajaj Auto has accused TVS of copying its intellectual property right by making use of its Digital Twin Spark Ignition (DTSi) technology in recent TVS models including the 125 cc bike, which was launched earlier this week.

The two-wheeler major, Bajaj Auto states that the DTSi technology was cross-filed in July 2002 under the patent number 195904. It tells it utilizes the technology on all its motorcycle models including the Discover and the Pulsar and plans to use it on its upcoming bike called the Exceed.

S. Shridhar, Bajaj Auto CEO (two wheelers) stated, “We have examined the TVS product, which has same ‘usage, size, and purpose’ like our DTSi engine. We have neither sold nor licensed this technology to anybody and as a clear case of infringement of intellectual property rights; we will take a suitable legal action against TVS Motors on Monday.”

Bajaj Auto’s DTSi technology utilizes two spark plugs at the both ends of the chamber, which allows faster combustion and effective burning of the fuel-air mixture that results in more power and greater mileage.

This would be the second time in one year that Bajaj Auto would be taking action over violation of its trademark rights. In February, the Pune-based auto major sued Chinese bike manufacturer Taian Chiran Machinery Company that had copied its flagship Pulsar bike.

Over the past four to five years, the DTSi technology has been at the core of Bajaj’s successes mainly because of better fuel efficiency and many other functions.