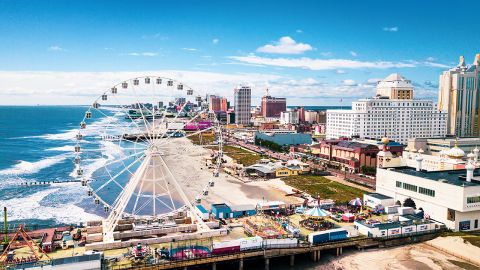 Atlantic City casinos enjoyed their best May in around a decade, as brick-and-mortar gaming facilities reported gross gaming revenue (GGR) of more than $230 million.

Land-based casinos in Atlantic City generated slightly more than $233 million in GGR last month, the industry’s best figure for the month under review since the year of 2012. Last month’s GGR also represented a gain of more than 9 per cent year-over-year and an improvement of around 4.5 per cent from pre-pandemic level recorded in May of 2019.

However, casino giants Caesars, Golden Nugget, and Harrah’s reported declined brick-&-mortar casino wins as compared with the corresponding month of last year. Luckily, those losses were offset by significant gains made by Borgata and Hard Rock – the two leading players in the region.

When asked for a comment, Plousis said, “Atlantic City’s casino win and total gaming revenue continued to outperform the same period last year as well as pre-pandemic levels. Total gaming revenue was the highest for May in over a decade thanks to growth in casino win, near-record internet gaming win, and an increase in sports wagering revenue.”

When we take all things combined, the gaming industry of New Jersey—the second-richest gaming hub in the United States behind Nevada – won over $430.6 million from gamblers in the month under review. Thus, business seems to be good for Atlantic City casinos, which are trying hard to swing back to pre-pandemic profitability.