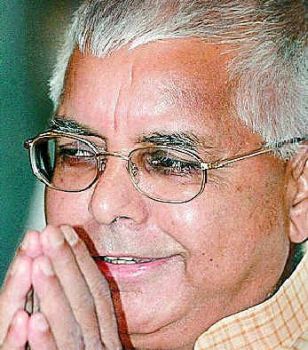 Justice Ramesh Kumar Datta, who had earlier reserved his order on the maintainability of the petition, fixed September 24 as the next date for the case.

The bench said the appeal could be entertained under section 378 of the CrPC (Criminal Procedure Code) relating to a case of acquittal, with the leave of the High Court.

Lalu and Rabri had contested the State Government's appeal, saying it was not competent to file an appeal in the DA case and all other fodder scam cases, which were investigated by the CBI.

On February 19, the Bihar Government had filed a petition in the Patna High Court against the acquittal of Lalu and Rabri.

The State Government had appealed against the verdict after the CBI, which investigated the case, decided not to challenge the acquittal.

Ram Jethmalani, the counsel for Lalu and Rabri, argued that since the CBI probed the case, the investigating agency and the Central Government alone were competent to challenge the CBI court verdict and not the State Government

He maintained that the NDA Government's appeal is "politically motivated".

A special Central Bureau of Investigation (CBI) court on December 18, 2006 had acquitted the duo.

The decision came as a major relief to duo in the case, which was pending since 1998.

Their income came under scrutiny after questions over what happened to the money allegedly siphoned off by the Rashtriya Janata Dal chief during the height of the fodder scam.

On March 11, 1996, the Patna High Court had directed the CBI to probe the fodder scam in which Lalu is one of the main accused. In the scam, the funds meant for cattle fodder were diverted from the animal husbandry department.

In the disproportionate assets case, the CBI had registered case against Lalu on August 19, 1998. According to the charges levelled, Lalu had amassed wealth to the tune of Rs 4,626,820 disproportionate to his known sources of income during the period 1990-97 as Bihar Chief Minister.

It was this case which had led the CBI to raid the Chief Minister's then official residence at 1, Anne Marg in Patna.

A chargesheet was filed against Lalu on April 4, 2000. Under the chargesheet, the name of Rabri Devi was also included as a co-accused for abetting her husband in the offence.

On April 5, 2000, Lalu and Rabri both surrendered before a CBI court. Rabri was granted bail, and Lalu was sent to jail. On May 10, 2000, Lalu was granted provisional bail by the Patna High Court, which was extended on 25 occasions.

A total of 132 people, including a former CBI SP of Patna, V S K Kaumudi, deposed for the prosecution.

The FIR in the case was registered by Kaumudi under the Prevention of Corruption Act. (With inputs from ANI