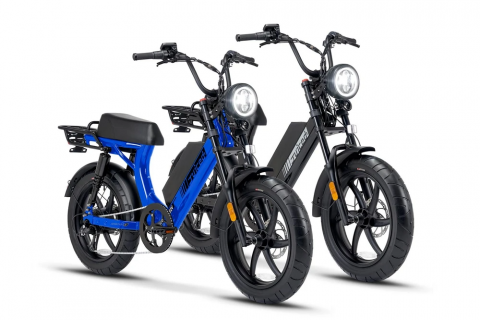 Juiced Bikes, California-based manufacturer of affordably-priced performance e-bikes, has teased a new e-bike that is expected to be introduced sooner than later.

The San Diego, California-headquartered e-bike manufacturer has just shared a new image on the company’s social media profiles, showing an electric bike with a rider drawing a large “X” in the sand. Some believe that the electric bike with the rider is parked on the massive “X” on a sandy terrain.

The manufacturer triggered speculation about the upcoming new electric bike model by describing the new EV in a teaser’s caption as the “new masterpiece” of the company.

In the teaser’s caption, Juiced Bikes wrote, “Who’s ready for an epic new #ebike? Any guesses on the name of our new masterpiece?”

One can see the new masterpiece by paying a visit to the manufacturer’s official Twitter account. Zooming in on the recently posted image provides some clues about what an EV enthusiast could expect from the new electric mobility solution.

The image clearly shows that the upcoming e-bike will feature sporty fat tires to ensure balance and greater grip to road. The manufacturer is already known for equipping a number of off-road and moto-styled e-bikes with fat tires. Some examples of such e-bikes include the RipCurrent, Scorpion, and Scrambler.

The e-bike in question also features a double crown fork, which is more typically found on motorcycles than bicycles. However, it can be seen on the HyperScrambler 2 as well as Scorpion electric models.

The image also shows a huge round headlight, wide frame tubes, and a wide saddle with a slight taper. All of these features confirm that the company is manufacturer is working on something similar to the HyperScrambler 2 or HyperScorpion. However, some believe that it is simply going to be a new e-bike that borrows some features, such as the headlight, fork, and saddle, from the Scorpion.

However, some of the features that we saw on the HyperScrambler 2 or HyperScorpion seem to be missing, such as a pair of mirrors. The Juiced Scorpion, which also lacks mirrors, resembles closely to the e-bike in the image. The new EV also features a rack behind the rider, providing space for things to carry.