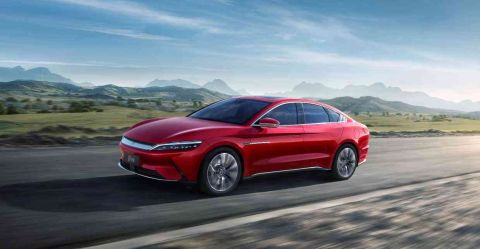 Chinese automaker BYD Limited recently introduced the world to its all-new Seal model, which has specifically designed to serve as one of the main competitors to the Tesla Model 3 electric sedan in China.

Based on the company’s EV-dedicated e-platform 3.0, the BYD Seal comes loaded with significant new technologies, such as cell-to-body (CTB) structural battery system. The CTB structural battery system utilizes four sections of the BYD Blade Battery, which aren’t only combined without modules but also become a structural element of the whole vehicle. As per BYD, the new CTB battery increases utilization of battery pack volume by 66%. In addition, it increases structural safety in case of a frontal crash.

The BYD Dolphin and the new BYD Yuan Plus are also based on the e-platform 3.0, but the Seal boasts more sophisticated technologies. Introducing the BYD Seal, the Chinese automaker also revealed their basic specs and prices. The BYD Seal is available for pre-orders in a total of four different versions: Standard Range RWD Elite, Standard Range RWD Premium, Long Range RWD, and Long Range AWD Performance.

The Standard Range RWD Premium has been priced (post-subsidy) at 225,800 CNY (US$33,738). It has the same system output and range as that of the RWD Elite version.

The blend of eye-catching design and high-tech specs along with attractive prices makes the BYD Seal very competitive. According to the manufacturer’s claims, more than 22,600 units were pre-ordered within seven hours after the EV’s official launch.