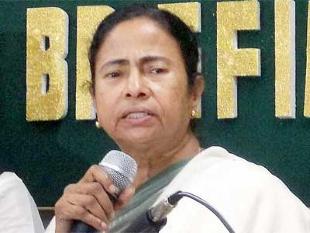 Kolkata, Feb 15 : West Bengal Chief Minister Mamata Banerjee Saturday said she will always remain in Bengal even as she vowed to take Trinamool Congress to the national arena.

"Do not worry, I will never leave Bengal, it is my motherland and I will work for Bengal till my last breath," said Banerjee while addressing party workers and its youth brigade in Burdwan district's Durgapur city.

Kickstarting the party's Lok Sabha campaign at a rally Jan 30, Banerjee had called for a change in power in Delhi and claimed that Trinamool was the only alternative to the Congress, the Bharatiya Janata Party (BJP) and the Left parties at national level.

Writer Mahasweta Devi and some other eminent people close to Trinamool have publicly expressed their desire to see her as the prime minister, while social activist Anna Hazare also praised her simple living and indicated he would back her.

The opposition has ridiculed Banerjee for her "prime ministerial ambitions" and accused her of neglecting her duties as the chief minister.

Reiterating that the fight was against the "joint forces" of the Congress, the BJP and the CPI-M, Banerjee said she has taken up the challenge of taking Trinamool to the national arena.

"Remember our fight is against the Congress, BJP and the CPI-M and their unholy nexus. We need to regain Bengal's glory and for that we need to be strong in Delhi. I have taken it as a challenge to make Trinamool an all-India party," Banerjee said.

She also said her party will contest in Bihar, Assam, Haryana and Tripura.

Banerjee is scheduled to address a public rally in Agartala Feb 25.(IANS)