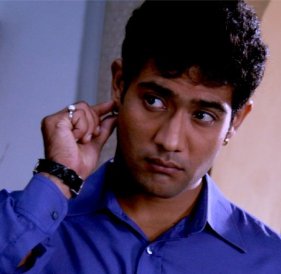 Cupid is striking thick and fast to our TV stars these days. The hot weather notwithstanding, rookie TV actors are finding comfort in each other’s arms. Cupid certainly appears to be making merry in Beyond Dreamz production shows.

First, it was the protagonists of Rang badalti odhani who were said to be a couple. Now it’s actors Karan Singh and Anushka from Jamunia who are allegedly seeing each other. The two play the characters of Kuber and Ghungru respectively.

A little birdie informs, “Something definitely is going on between Karan and Anushka. We’re shooting in Chhattisgarh where we have separate enclosures for men and women. However, Karan keeps making regular visits to Ghungru’s room. When not shooting, the duo spends most of their time together.”

When contacted, Karan only added fuel to speculations with his comments.

“Shooting in Chhattisgarh is very tough. The extreme heat and rural environment takes a toll on you. It gets pretty boring out there. If you get a good company then there’s no harm in it. Anushka and I enjoy each other’s company. We share a very good chemistry. In fact, we even joke between ourselves by referring to each other as husband-wife,” said Karan Singh.

Does he have feelings for her and vice versa?

“We are very close friends but we don’t have those feelings as yet. As said before, we like each other’s company and that’s why we spend lot of time together,” replied the actor.