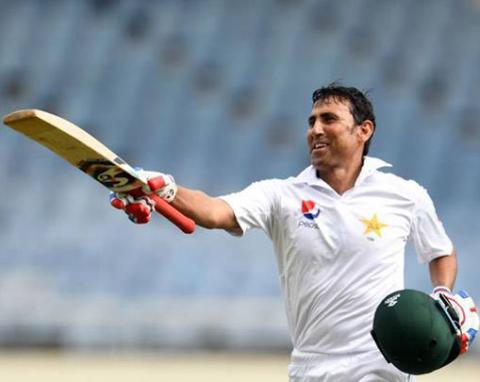 Karachi [Pakistan], Apr 24 : Veteran batsman Younis Khan has become the first Pakistani cricketer to complete 10,000 runs in Test cricket as his team reached reach 201-4 in reply to West Indies' 286-10 on the third day of the rain-affected first Test here at the Sabina Park, Kingston.

Younis, playing in his 116th test match, smashed five boundaries and a six in his gritting knock of 58 (132 balls) and shared a 131-run third-wicket partnership with Babar Azam (72) which gave the tourists an upper hand into the final session of the day.

The 39-year-old, who needed 23 runs at the start of his innings to reach the milestone, swept a delivery from off-spinner Roston Chase in the first over after Tea to the backward square-leg boundary to become the first Pakistani batsman and just the 13th player overall - and the oldest - in the history of the game to scale that summit, reports the Dawn.

"I thought about bowing out of international cricket three years ago but one of the motivating factors for me to stay was to get to ten thousand runs," Khan said after the end of the day's play.

"I am finished after the series, no matter how many runs I score, but I just hope I have been able to make a useful contribution as a player and also help the younger ones to do as well as I have, or even better, added the former skipper.

His career batting average of 53.02 is also the best by any Pakistani batsman and the third best by any batsman from Asia.

Former Australia captain Ricky Ponting is next with 13,378 from 168 Tests, followed by South African all-rounder Jacques Kallis who scored 13,289 in 166 Tests.

Younis has already announced that he will retire from international cricket after the ongoing three-match Test series against West Indies.

In January, Younis also became the first cricketer in Test history to score centuries in 11 countries when he smashed his 34th hundred in the third Test against Australia at the Sydney Cricket Ground (SCG), tying him with Sunil Gavaskar, Mahela Jayawardene and Brian Lara in the all-time list at sixth place. (ANI)