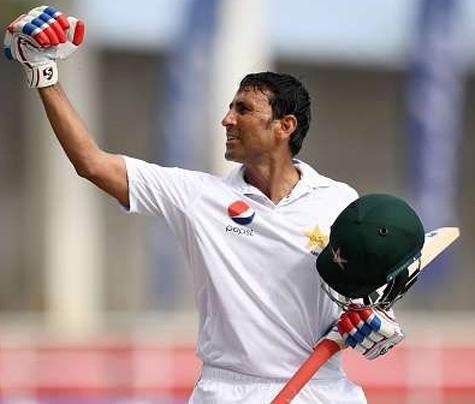 The 39-year-old achieved the landmark when his team reached 201-4 in reply to West Indies' 286-10 on the third day of the rain-affected first Test at the Sabina Park in Kingston.

Younis, playing in his 116th test match, smashed five boundaries and a six in his gritting knock of 58 (132 balls) and shared a 131-run third-wicket partnership with Babar Azam (72) which gave the tourists an upper hand into the final session of the day.

Younis, who needed 23 runs at the start of his innings to reach the milestone, swept a delivery from off-spinner Roston Chase in the first over after tea to the backward square-leg boundary to become the first Pakistani batsman and just the 13th player in the history of the game to achieve this feat.

Former Pakistan skipper Javed Miandad, who earlier was the country's highest run-getter in the longest format of the game with 8832 runs in 124 Tests, lauded Younis.

"It is an honour for Pakistan that Younis hit the mark. Younis proved himself a great cricketer," the Dawn quoted Miandad as saying.

Lavishing praise on Younis, former Test opener Ramiz Raja admitted that it was a great achievement and proud moment for Pakistan cricket.

"I congratulate Younis on reaching 10,000-run milestone. This is a great and proud moment for everyone," Ramiz said.

Insisting that Younis has been a shining star for Pakistan cricket, Ramiz added, "Making 10,000 runs in Tests is a great thing because this isn't something you can do every day in cricket."

Former chief selector Salahuddin Sallu also hailed Younis' contribution for the country's cricket, saying the latter is a tremendous player who had won number of games for Pakistan.

"He has been a tremendous player who won so many games for us. But he is a far greater human being who commands respect of his colleagues and junior players alike. Younis is a class act who will be sorely missed," he added.

Calling on the Pakistan Cricket Board (PCB) to utilize Younis' services even after retirement, former Test pacer Shoaib Akhtar believes the milestone man has been built to work for cricket and has been a real star for Pakistan.

"The Pakistan Cricket Board (PCB) should utilise Younis's services after his retirement, he is a star, and he has scored 34 centuries for Pakistan. It is important for us to utilise him for future," stressed Shoaib.

Young batsman Fawad Alam also congratulated Younis while admitting that the veteran batsman has always been there to help him and other youngsters on and off the field.

"I congratulate Younis on making 10,000 runs. We all are proud of Younis. He has always been very helpful to me and other players every time when we sought his help," Fawad said.

Former Australia captain Ricky Ponting is next with 13,378 from 168 Tests, followed by South African all-rounder Jacques Kallis who scored 13,289 in 166 Tests.

Younis' career batting average of 53.02 is also the best by any Pakistani batsman and the third best by any batsman from Asia.

In January, Younis also became the first cricketer in Test history to score centuries in 11 countries when he smashed his 34th hundred in the third Test against Australia at the Sydney Cricket Ground ( SCG), tying him with Sunil Gavaskar, Mahela Jayawardene and Brian Lara in the all-time list at sixth place. (ANI)