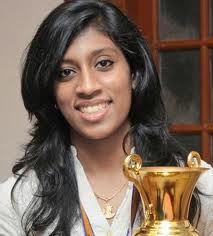 Mangaonkar came through when his opponent Abdulla Al-Tamimi (Qatar) suffered an injury Monday and rendered the court unplayable resulting in the match being awarded to the Indian.

Al-Tamini was forced to concede the match against Mangaonkar in the third game after the two had split the opening two.

Blood from Tamimi's self-inflicted injury was deemed, after extended discussions, to have made the court unplayable. This gave Mangaonkar the match and a berth in the quarter-finals.

Earlier in the day, Mangaonkar defeated a pumped up Mathew Sidaway of England 12-10, 11-2, 11-7 to progress to the pre-quarter-finals.

In the women's singles, Anaka also justified her billing by reaching the quarter-finals defeating Ho Ka Po from Hong Kong in four games.

Ka Po had Anaka scurrying all around the court in the first game winning it 11-8. From there on, Anaka was more composed and comprehensively defeated her opponent with her basic and dogged drives.

Both Mangaonkar and Anaka are up against higher ranked Egyptians, second seed Mohamed Abouelghar and 3/4 seed Yathreb Adel, respectively.