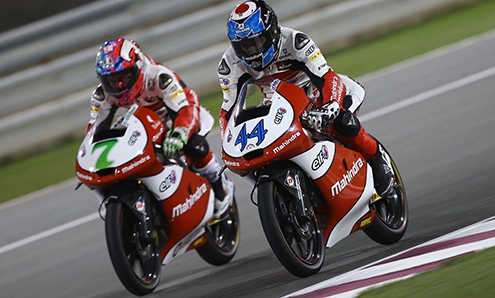 The 18-year-old Oliveira stayed with the leading five for the early laps, and they were still within sight as he fought back and forth for sixth position Sunday. He lost it over the line by less than a tenth of a second, earning Mahindra's best-ever GP finish in the MGP3O's first race of the 2013 season.

Vazquez, 26, was trading blows in an even bigger battle, close behind. Four bikes crossed the line within just over half a second. The Mahindra rider was second in the group by a breathtaking 0.029 of a second, in 10th place.

Mahindra is in its third year in GPs, the second in the new Moto3 class. The new MGP3O has been made in conjunction with Swiss company Suter Racing. The next race is at the new Circuit of the Americas in Austin, Texas, in two weeks' time.

Oliveira said: "It is a little bit frustrating when you feel you have the potential to fight for the top five, but in our first race we are very happy to be the first non-KTM bike."

"This is a big accomplishment for a bike that only came together hardly two months ago. I am really happy about the project and I am looking forward to the future races, optimistic that we will be able to improve a lot."

Vazquez said: "The result is a good surprise for me, but I finished the race a little bit angry because I think my rhythm was good enough to battle with Miguel. I lost time in the early laps, starting on row three, but finally, the team got two really great results in the first race and that is very important for everybody."

Mahindra Racing CEO Mufaddal Choonia said: "It was a very encouraging start, considering that six months ago this bike was still on the drawing board. To see both riders in the top ten is really encouraging.

"It gives us a good platform to build on. We are so fresh and new into the project, and I am confident that we can really grow from here on."(IANS)