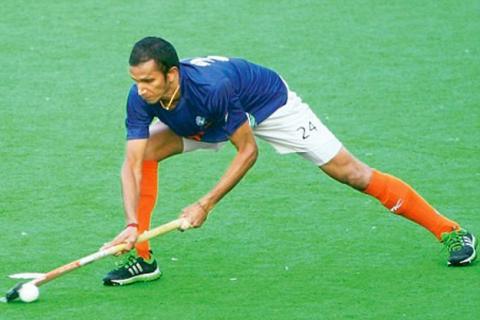 Muscat [Oman], Mar.31 : Indian forward S.V Sunil has been named the Asian Player of the Year 2016 in the senior men's category by the Asian Hockey Federation (AHF).

Meanwhile, dragflicker Harmanpreet Singh has been named the Asian Promising Player of the Year 2016 in the junior men's category.

The nominations for these awards were made by coaches across Asia from the national teams in Asia and the criteria of nomination was based on the performance of the year 2016.

SV Sunil played a vital role in team India's successful outing at FIH Champions Trophy in London last year where he led the forwardline and was instrumental in the team's historic Silver medal winning performance. Considered to be one of the fastest men on the pitch in the world, Sunil has also served as the team's Vice Captain and is entrusted with the duty of leading by example.

The Coorg lad thanked the AHF for the award stating that it's a big boost to be named the Asian Player Of The Year.

"This award is an icing on the cake. I believe Indian hockey is growing year by year and we have enjoyed some memorable victories in 2016. This award could not have been possible if not for our team work. I would like to thank Hockey India for their efforts, our coaches and support staff too who work with us day in and day out as one big family. It is always a good feeling to be recognized with such awards as it only adds to the player's motivation to improve," stated SV Sunil.

Harmanpreet Singh, on the other hand, had a stupendous 2016 with the Indian junior men's team winning the Uttar Pradesh Hockey Junior World Cup Men Lucknow 2016 where he led the team's defence and was instrumental in converting penalty corners, he was also part of the Indian men's team at the 2016 Rio Olympics and the FIH Champions Trophy in London where the Indian team won a historic Silver medal.

"I am very excited to receive this award. I have said this before that awards and recognition is a big motivation for a young player like me to improve on my skills and come up with memorable performances. I believe 2016 was a great year for Indian hockey and I would like to thank the AHF for honouring me with this prestigious award and Hockey India for their ongoing support," stated Harmanpreet Singh who is currently part of the Indian senior men's national camp that is preparing for the Sultan Azlan Shah Cup.

Since Harmanpreet Singh and SV Sunil are currently training at the national camp in SAI, Bengaluru, the awards were recieved by Tapan Das, Treasurer and Mohd Mushtaque Ahmad, Secretary General, Hockey India respectively.

Hockey India President Mariamma Koshy congratulated the players for the coveted awards. "It is a special moment for Indian hockey. With PR Sreejesh recieving the Padma Shri Award and Asian Hockey Federation announcing Harmanpreet Singh and SV Sunil as Asian Promising Player of the Year and Asian Player of the Year respectively is a big feat. I would like to congratulate the players for their efforts and also the entire team management who have worked like a unit in bringing good results. Awards are always a big motivation for greater things to come and I wish the team many more such accolades in the future."(ANI)