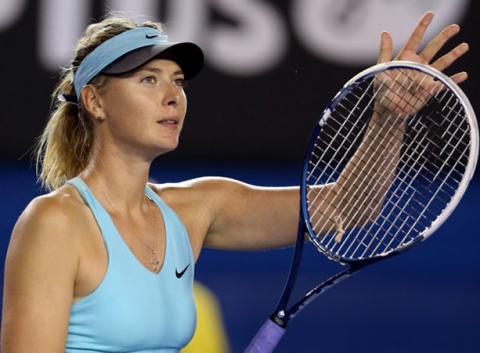 London [U.K], Apr 27 : Russian tennis star Maria Sharapova marked her competitive return from a 15-month doping suspension with a straight-sets victory over Italy's Roberta Vinci in the opening round of the Stuttgart Open last evening.

The former World number one, who has been handed wildcard for the tournament, recovered from losing her first service game to register a 7-5, 6-3 win over Vinci in a thrilling first-round contest.

With the win, Sharapova has now set up a second-round encounter against Russia's Ekaterina Makarova, who clinched a 6-2, 6-4 win over Polish star Agnieszka Radwanska.

It was Sharapova's first match since her quarter-final defeat to World number one Serena Williams at the 2016 Australian Open, where she was tested positive for banned substance Meldonium.

Meanwhile, the five-time Grand Slam champion has also been handed wild cards for Madrid (May 7-13) and Rome (May 15-21) tournaments.

Her ultimate goal is to gain entry into the French Open, as she can earn a place in the qualifying draw for Roland Garros only if she reaches the final in Germany.

Whether Sharapova will receive a wildcard for French Open will be known on May 15, just a week before qualifying begins for the second major of the season, which is slated to be held from May 28 to June 11.

Earlier this month, French Tennis Federation (FFT) president Bernard Giudicelli had hinted at their reservations to give the 30-year-old player a wild card entry which she would require as her world ranking has almost disappeared during her absence.

Sharapova's initial two-year ban was earlier reduced to 15 months following an appeal to the court of arbitration for sport, which concluded she had not intended to cheat. (ANI)