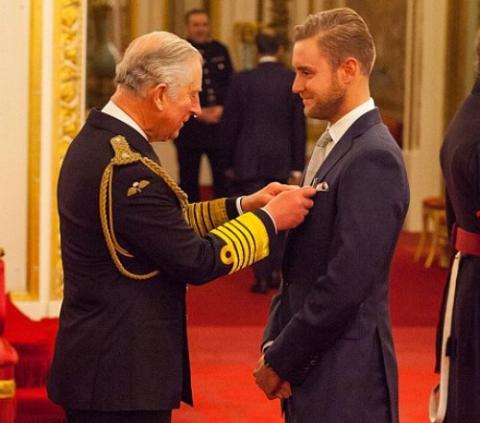 London [UK], Feb. 11 : England pacer Stuart Broad has received an MBE from Prince Charles after the England and Wales Cricket Board (ECB) interviewed him, along with batsman Joe Root and all-rounder Ben Stokes to succeed Alastair Cook as captain of the national cricket team.

It is reported that the 30-year-old accepted the honour at a Buckingham Palace ceremony.

After receiving the honour, Broad posted a picture on Twitter, saying 'Proud'.

Broad was interviewed by England director of cricket Andrew Strauss and the chairman of selectors James Whitaker Stokes and Root.

Broad was recognised for his services to cricket by the Prince of Wales at Buckingham Palace on Thursday, reports the mirror. co. uk.

Cook, who led the England side for a record 59 Tests, stepped down as captain earlier this week following much speculation over his future in the wake of his side humiliating 0-4 defeat at the hands of India in the five-match series.

The ECB is yet to name Cook's successor, with Root being tipped to take over the mantle with an announcement expected within a week or so.

Both Stokes and Broad have assumed leadership roles in the limited overs arena, with the former acting as Jos Buttler's vice-captain for the tour to Bangladesh in the absence of regular skipper Eoin Morgan.

Meanwhile, Broad is a former captain of the England's T20 side.(ANI)