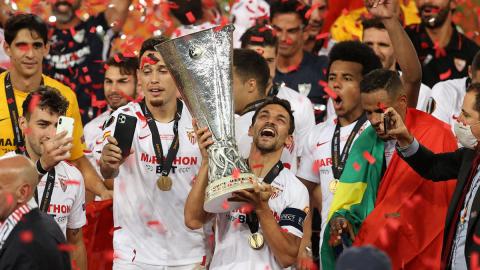 Sevilla claimed their record sixth Europa League title after 3-2 triumph over Inter Milan in a thrilling final on Saturday. Romelu Lukaku opened the scoring and gave Inter a fifth-minute lead from the penalty spot. Sevilla's semi-final hero Luuk de Jong overturned the deficit with a pair of fine first-half headers and handed his side a 2-1 lead.

Diego Godin then scored an equaliser for Inter in the 35th minute, making the game more intense as the first-half scoreline read as 2-2.

The final and deciding goal came from a bicycle kick, which was deflected into Samir Handanovic's net by Lukaku.

After the 3-2 lead, Sevilla stopped playing and instead tried only to restrict the Nerazzurri. The chance in the 81st minute for Moses and then Sanchez, which was cleared off the line by Kounde, was really the last act in a match for Inter.

Sevilla now have six titles which is exactly double the three trophies that Inter, Juventus, Atletico de Madrid, and Liverpool all have.

There are eight clubs who have won the Europa League twice, including big clubs such as Chelsea, Real Madrid, Porto, and Feyenoord while fifteen sides have won it once, including teams such as Ajax, PSV Eindhoven, Bayer Leverkusen, Bayern Munich, Valencia, and Napoli.