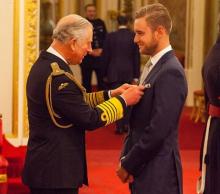 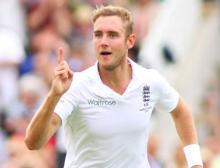 Johannesburg [South Africa], Nov.21 : England pacer Stuart Broad is all set to miss the third Test of the ongoing five-match series against India after himself ruling out of the game, saying a stra 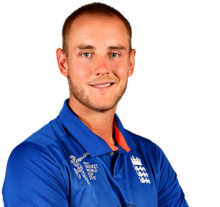 London, Aug 14 : England fast bowler Stuart Broad has been fined 20 per cent of his match fee for breaching the ICC Code of Conduct during the fourth Test against Pakistan at The Oval.

Broad was found to have violated Article 2.1.3 of the ICC Code of Conduct for Players and Player Support Personnel, which relates to "Public criticism of, or inappropriate comment in relation to an incident occurring in an international match". 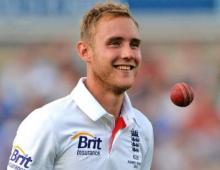 London, March 4: England fast bowler Stuart Broad says he wants to be a regular member of the One-Day International (ODI) side in order to feature in the home World Cup in 2019.

The 29-year-old has been left out of the World T20 and has played only two ODIs since the 2015 World Cup.

"I've got a lot of hunger and desire to get back in that team consistently," Broad was quoted as saying by the BBC on Friday. 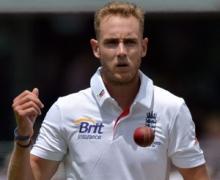 Johannesburg, Aug. 18 - England fast bowler Stuart Broad has revealed that skipper Alastair Cook urged his side to cement the `burning desire` of winning the Ashes series by 4-1 against Australia.

The 29-year-old also said that Cook asked them to show the tourists that they are still in a battle and that they want to start the game again.

Broad further said that those who were involved in the 5-0 loss against Australia in the last Ashes Test know how important it is to win the last Test, Sport24 reported.