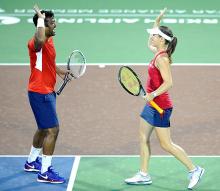 Melbourne [Australia], Jan.23 : Indian tennis ace Leander Paes and his Swiss partner Martina Hingis booked their place in the quarter-finals of the season-opening Australian Open after clinching a 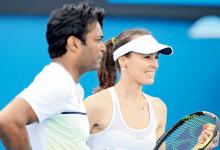 Melbourne [Australia], Jan.22 : Indian tennis ace Leander Paes and his Swiss partner Martina Hingis produced a sublime performance as they marched into the second round of the mixed doubles event a 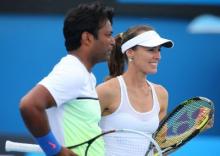 New York [USA], Sept 1 : Indian tennis ace Leander Paes and his Swiss partner Martina Hingis kicked off their US Open mixed doubles defence with a thumping victory in the opening round at Flushing Meadows here.

The Indo-Swiss duo secured a 6-3, 6-2 win over American pair of Sachia Vickery and Frances Tiafoe in a contest that lasted just 51 minutes at Court 11. 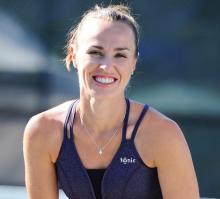 New Delhi, Aug 11 : Sania Mirza and Martina Hingis on Thursday announced that they will join forces once again at the WTA Finals, which is scheduled to be held in Singapore later this year.

In a joint statement posted on Twitter, the top-ranked women's doubles pair stated that they had mutually decided to split following their recent defeats against lower-ranked players.

"After three Grand Slam victories and 11 WTA doubles titles together, we have mutually agreed that we would be open to playing with other players for the remainder of the season," Mirza and Hingis said.

Mirza-Hingis bow out of Rogers Cup in quarters 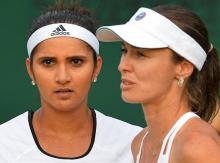 Montreal, July 30 : Top seeded pair of Sania Mirza and Martina Hingis crashed out of the Rogers Cup after going down to Christina Mchale and Asia Muhammad in the quarterfinals of the women's doubles event here on Saturday.

The Indo-Swiss pair were far from their best as they were beaten 4-6, 3-6 by the unseeded American duo in a match that lasted 70 minutes.

Both Mirza and Hingis will take part in next month's Rio Olympics, where the former will partner India's Rohan Bopanna and Prarthana Thombare in the mixed doubles and women's doubles respectively.