Mirza-Strycova knock out of Qatar Open in semis 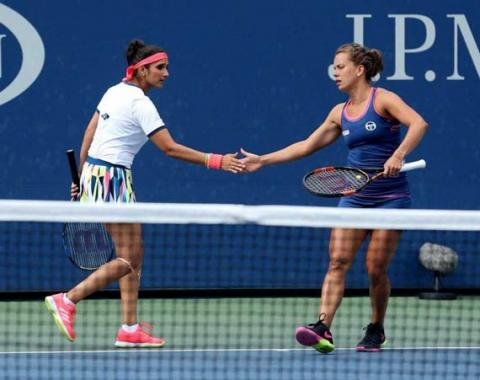 Doha [Qatar], Feb.18 : Indian tennis ace Sania Mirza and her partner Barbora Strycova of Czech Republic suffered a major blow as they crashed out of the ongoing Qatar Open after going down in the semi-finals of the tournament here last evening.

Mirza and Strycova suffered a 3-6, 6-1, 8-10 defeat at the hands of fourth-seeded pair of USA's Abigail Spears and Slovenia's Katarina Srebotnik in a thrilling last-four clash that lasted an hour and 10 minutes.

After losing the first set, the Indo-Czech pair rebounded strongly to comfortably win the second and take the match to the tie-breaker , but it was eventually sealed by Spears and Srebotnik.

It was Mirza and Strycova's first tournament together after season-opening Australian Open, where the team suffered a third-round exit following a defeat against unseeded Japanese pair Eri Hozumi and Miyu Kato.(ANI)