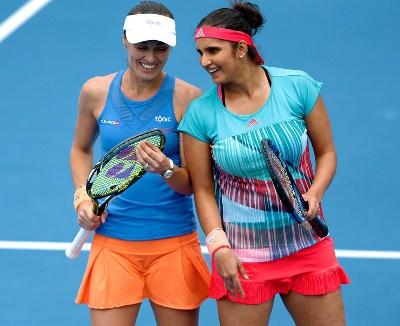 Doha, Feb. 26 : Indian tennis ace Sania Mirza and her Swiss partner Martina Hingis's incredible 41-match winning streak came to a sudden halt as they suffered a shocking defeat in the quarterfinals of the Qatar Total Open here on Friday.

The Indo-Swiss pair were beaten at the hands of Russian pair of Elena Vesnina and Daria Kasatkina 6-2, 4-6, 5-10 in the quarter-final clash that lasted for one hour and 17 minutes.

Reflecting on her defeat, Mirza wrote on Twitter, "So that's how the cookie crumbled ... just kiddin. Hehe.. We'll be back stronger than before #SanTina."

If Mirza and Hingis would have won the title in Doha, they would have equaled Jana Novotna and Natasha Zvereva's unbeaten streak of 44 match wins.

Earlier, the top-seeded pair won their third consecutive women's doubles Grand Slam title by lifting the Australian Open trophy. They have bagged a total of 13 women's double titles since joining forces in last year in March.(ANI)