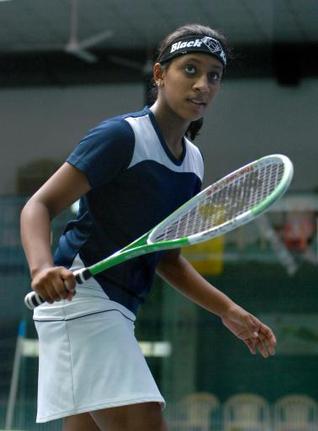 Abouelghar is no stranger to these occasions, having contested the finals of the World Juniors and the British Juniors. For Mangaonkar and India, this was new territory, and he came so close to conquering the Egyptian camp.

Mangaonkar seemed a bit more determined than his opponent as he took the first game on extra points and then three points in a row at the end of the second to double his lead.

In the third, Abouelghar seemed to get down to his work with more concentration and opened up a small lead but still found himself hanging on to it at the end.

In the fourth, Mangaonkar made the move at 9-all to earn a match ball that put both camps on the edge of their seats. A delicate drop from Abouelghar saved it, and two more points set up a decider.

In the fifth game, Mangaonkar took the first three points and Abouelghar the next four, but the Indian countered to lead 7-5 and 8-6.

At this point, Mangaonkar looked stronger while the Egyptian seemed to be playing more in hope than with any conviction. However, a couple of errors from the Indian saw Abouelghar level at nine.

Mangaonkar then took a point for match ball, but again Abouelghar rallied to make it 10-all and went on to take the next two points for the match.

Meanwhile, Anaka seemed to start slowly and only picked up her game towards the tail end of the second game. Yathreb was on fire in the first two games, dispatching volley drop shots with ease.

In the third, Anaka found the authority to move up in the court and played some lethal volley drop shots of her own to bounce back into contention.

The fourth game was nail biting as the two eventually levelled at 9-all before Yathreb stepped up the pace to take two points on the trot to seal the match. (IANS)