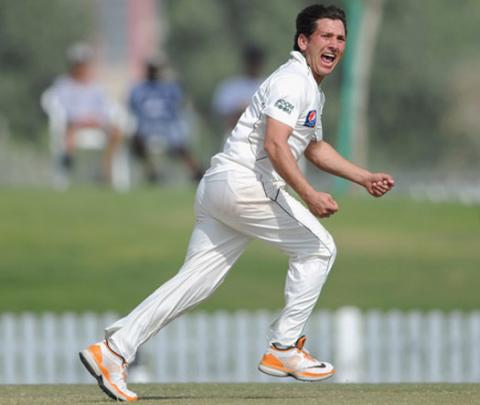 Jamaica [West Indies], Apr 26 : Yasir Shah led from the front and scalped a six- wicket haul as Pakistan registered a seven-wicket win over West Indies in the opening Test of the three-match series at the Sabina Park here on Wednesday.

Trailing by 121 runs from the first innings and resuming at the overnight score of 93-4, the Caribbean side were bundled out for 152 runs in their second innings after spending less than two hours on the fifth and the final day.

Yasir, who bagged all the four wickets on Day 4, added two more wickets in his account to finish the innings with the figures of six for 63.

Mohammad Abas also took two wickets while Mohammad Amir and Wahab Riaz also chipped in with a wicket each.

Chasing a target of just 32 runs to win, Pakistan made a slow start as they lost their three wickets for mere 24 runs before skipper Misbah-ul-Haq smashed two consecutive sixes off Devendra Bishoo's delivery to end Pakistan's run of six consecutive Test match defeats.

Earlier, Test skipper Misbah-ul-Haq, who will bid adieu to the international cricket following the ongoing series, led from the front as he smashed a blistering 99-run knock besides sharing an 88-run partnership with Sarfraz Ahmed (54) for the sixth wicket to guide Pakistan to a first innings total of 407 runs in reply to the Windies score of 286.

Veteran batsman Younis Khan, who had also announced that the Caribbean series would be his last, also struck 58 runs while Babar Azam contributed with a significant 72 runs in his side's innings.

Yasir, who also took two wickets in the first innings, was declared `Man of the Match` for his brilliant contribution with the ball.

Pakistan, who have now taken a 1-0 lead in the series, will now lock horns against West Indies in the second Test, beginning April 30 at Bridgetown in Barbados. (ANI)