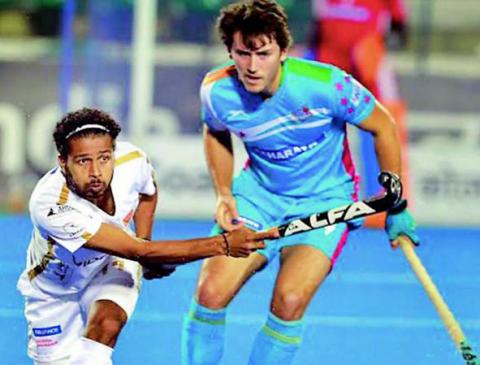 It was Ajay Yadav (12') and Ramandeep Singh (17') who scored for the home team while Gurjant Singh (13') and Manpreet (19') ensured Dabang Mumbai split the points.

First, it was Uttar Pradesh Wizards' Ajay Yadav, to fetch a 2-0 lead for the home team in the 12th minute. He was assisted by the experienced VR Raghunath who did well to find Yadav.

The youngster was impeccable with a powerful shot that beat Dabang Mumbai's experienced goalkeeper David Harte. Dabang Mumbai, made up almost immediately, when Gurjant Singh popular for his back hander struck in the 13th minute to equalise.

It was his teammate Manpreet from the Junior World Cup winning team who did extremely well to dribble past Raghunath and Gonzalo Peillat in the circle to find Gurjant who simply had to tap the ball into the post.

It continued to be an open game in the second quarter too with both teams improvising their performance. Home team's forward Ramandeep Singh showed class with a brilliant back hander to score in the 17th minute and give his team a 4-2 lead.

He was remarkable to beat two defenders after a perfect assist by his skipper Raghunath that sent the home crowd roaring in joy. However, the lead lasted only two minutes as Dabang Mumbai's Manpreet equalized in the 19th minute.

At the end of the third quarter, the score continued to read 4-4. Though Uttar Pradesh Wizards dominated the quarter with the ball possession, they couldn't quite make much of it as some of their ambitious attempts at scoring a goal was promptly denied by Dabang Mumbai's defence.

Krishan B Pathak, who replaced keeper David Harte in the final 15 minutes, starred for Dabang Mumbai with a great save in the 56th minute. It was Agustin Mazzilli who set up a counter attack, feeding the ball to Wouter Jolie who then found Akashdeep Singh but the forward's attempt was padded away by an alert Pathak. Uttar Pradesh Wizards won the match's first penalty corner with only six seconds left for the final hooter. It was Mazzilli who fetched the penalty corner but his Argentine teammate Peillat failed to convert as his flick went far and wide, thus ending the match in a 4-4 draw.

Uttar Pradesh Wizards will now play against Kalinga Lancers while Dabang Mumbai will take on Delhi Waveriders in the last four clash on Saturday. (ANI)