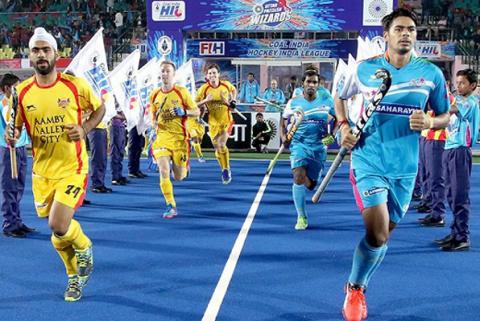 Lucknow [India], Feb. 17 : Uttar Pradesh Wizards enthralled the home crowd with a scintillating 4-0 win against two-time title holders Ranchi Rays that lifted them to the third spot in the points table in the ongoing fifth edition of the Hockey India League (HIL). Field goals by Seve van Ass (37') and Akashdeep Singh (60') sealed the much-needed five points from the match here on Thursday.

When the two teams met earlier in the league, they split the points with a 0-0 draw in Ranchi.

Placed at the bottom of the table, and three more games left in the pool stage, it was a must-win game for the home side to keep their semi final hopes alive.

Ensuring the Uttar Pradesh Wizards didn't concede PCs was one of their key strategies insisted skipper V.R Raghunath ahead of the match and they stuck to the plan.

While both teams went into the first break locked in a stalemate, Uttar Pradesh Wizards got off the blocks in the second quarter pressing hard in the circle and it paid off when they won the first PC in the 19th minute.

But the chance went begging when Argentine drag flicker Gonzalo Peillat's strike was padded away by Ranchi Rays' goalkeeper Tyler Lovell. Arthur van Doren fetched the home team their second PC in the 26th minute but Raghunath's flick was blocked by Ranchi Rays' first rusher Manpreet Singh. The first half ended with the score reading 0-0.

A sloppy defence in the heart of the striking circle saw Ranchi Rays concede a field goal when Seve van Ass was left unmarked. The Dutchman made no mistake in taking advantage of the opportunity as he tapped the ball past Tyler Lovell in the 37th minute giving the home team a 2-0 lead.

Ranchi Rays came close to equalizing in the 40th minute when Flynn Ogilvie took a shot at the post after a good assist by Timothy Deavin but an alert P.R Sreejesh ensured the Uttar Pradesh Wizards kept the lead.

The final quarter witnessed the Ranchi Rays hold much of the ball possession but they also lost their video referral when they asked for a PC due to a stick tackle in the circle but the referral went against Ranchi Rays' favor.

Uttar Pradesh Wizards' defence was rock solid today as they denied the visitors any chance at scoring though the Ranchi Rays had as many as 12 circle entries. Akashdeep Singh struck another field goal with just seconds to go for the final hooter to win the match 4-0. (ANI)