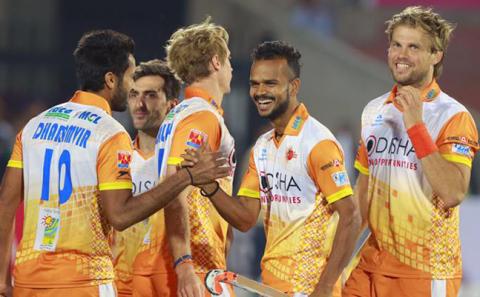 Fuerste scored twice (30' and 59') before Glenn Turner struck a field effort for the Odisha outfit, which lost the final last year to Jaypee Punjab Warriors.

Table toppers Dabang Mumbai who have shown great consistency through the league were kept in the hunt right from the word go with Kalinga Lancers showcasing some class act to defend their circle. Though the first quarter ended in a stalemate, the Kalinga Lancers made quick progress in the second quarter when Aussie forward Glenn Turner, after a brilliant assist by skipper Moritz Fuerste, ensured a 2-0 lead in the 18th minute.

Though Dabang Mumbai had an opportunity to score in the 18th minute when they won their first penalty corner, thanks to Robbert Kemperman, Harmanpreet Singh's fiercely struck flick went straight to keeper Andrew Charter who promptly padded it away. German stalwart who has shown incredible form, especially with his drag flicks, was inch-perfect yet again when he successfully converted a penalty corner in the 30th minute to take Kalinga Lancers lead to a comfortable 3-0. This was his ninth successful penalty corner this season, taking his personal tally to an impressive 11 goals in the tournament.

Dabang Mumbai made a strong comeback after the 10-minute half-time break as they won their second penalty corner of the match in the 33rd minute. An interesting set-piece saw Harmanpreet, instead of taking the flick himself, feed the ball to the injector who cleverly deflected it to Affan Yousuf in front of the post to convert it into a goal and take their deficit to 1-3.

The final quarter witnessed some intense hockey with Dabang Mumbai hoping to pull off their trademark style of winning matches - to score in the final moments. They even came close to scoring when Yousuf and Nikkin Thimmaiah worked in tandem to score a field goal. After two failed attempts, Kieran Govers scored to equalize with just three minutes to go for the final hooter. However, a video referral in favour of the Kalinga Lancers denied them the clincher as it was a dangerous ball inside the striking circle. Dabang Mumbai also won three back-to-back penalty corners in the 57th minute but failed to make it count.

The action didn't end there as Kalinga Lancers earned a penalty corner in the 59th minute and Moritz Fuerste ensured he sealed the match for Kalinga Lancers with a splendid drag-flick that beat David Harte like a bullet, making him the joint highest goal scorer of the tournament along with teammate Glenn Turner.