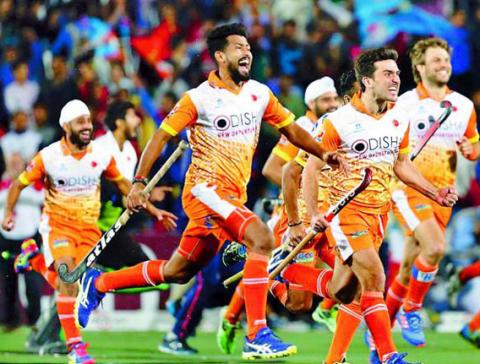 Chandigarh [India], Feb.25 : Kalinga Lancers held their nerves to make it to their second successive final of the Hockey India League (HIL) after a dramatic 4-3 win against Uttar Pradesh Wizards in a nerve-wrecking penalty shootout here last evening.

It was Aran Zalewski who struck the golden goal in the sudden death beating PR Sreejesh that saw them seal the finals spot. Lalit Upadhyay too scored twice in the shootout to help the Kalinga Lancers win.

The boisterous Chandigarh spectators couldn't have asked for a better semi-final encounter with both teams showcasing incredible prowess that took the match into a tense shootout after they ended the 60-minute play with a 4-4 draw. Kalinga Lancers goalkeeper Andrew Charter rose to the occasion with some incredible saves that saw his team through.

Uttar Pradesh Wizards got off to a fine start by winning their first penalty corner as early as in the 3rd minute of the match however Argentine drag flicker Gonzalo Peillat's attempt was slightly off the mark.

But they rallied back stronger to take a 2-0 lead in the 4th minute when Arthur van Doren, who was awarded the FIH Rising Star of the Year 2016, was impeccable with his stick work to assist Florent van Aubel who effortlessly put the ball past Kalinga Lancers goalkeeper Andrew Charter. Kalinga Lancers reduced the deficit in the 9th minute when they won their first penalty corner.

Though Moritz Fuerste couldn't take the flick due to a miss trap, they quickly recovered with Aran Zalewski finding the rebound only to assist Devinder Walmiki who deflected the ball into the post ending the first quarter with the score reading 2-1 in favour of Uttar Pradesh Wizards.

Coach Roelant Oltmans' men continued to be impressive in the second quarter as they won a penalty corner soon after the two-minute break. However, they couldn't make much of the opportunity as Peillat's flick was promptly padded away by an alert Charter.

Uttar Pradesh Wizards in-form forward Akashdeep Singh made several strong attempts at converting a field goal and he even came close to scoring one in the 18th minute when he showcased fine dribbling skills to race into the circle and take a strike but he was slightly off the mark. His team won another penalty corner this quarter but skipper VR Raghunath's fiercely struck flick was saved by Charter.

With the half time score of 2-1, Uttar Pradesh Wizards were quick to win a penalty corner in the 24th minute but both the attempts by Raghunath failed to make the post. However, Kalinga Lancers didn't miss out on the opportunity as their in-form captain Moritz Fuerste, who is also a two-time Olympic gold medalist for Germany, came up with an incredible flick to send the ball past PR Sreejesh like a lightning to equalize in the 35th minute. They came close to taking a 3-2 lead in the 44th minute, but both the attempts by Moritz Fuerste were saved by a strong Uttar Pradesh Wizards defence ending the quarter at 2-2.

It was an intense final quarter, with the Kalinga Lancers turning an evenly poised game in their favour when Aussie forward Glenn Turner beat the Uttar Pradesh defenders to find Billy Bakker who scored a fine field goal to take their score to a strong 4-2. Though the Kalinga Lancers won another penalty corner in the 53rd minute, Fuerste's attempt was pushed outside the circle by Raghunath.

Akashdeep Singh scored a crucial field goal to equalize in the 58th minute after a bit of a scramble in the circle. They were quick to earn two back-to-back penalty corners with just a little over a minute to go for the final hooter. But they couldn't make much of it while Kalinga Lancers showcased good defensive skills to take the match into a thriller of a shootout. (ANI)