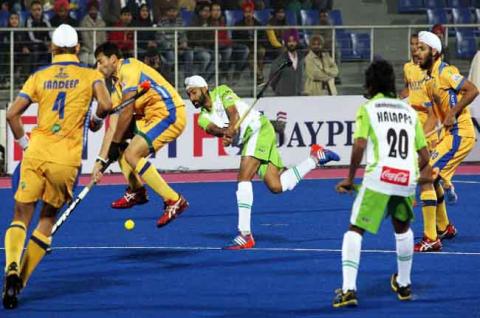 With the win, Waveriders also pushed the defending champion to the bottom of the table and further dented their dreams of playing the semi-finals in front of their home crowd next weekend in Chandigarh.

Delhi Waveriders struck early when Mandeep Singh won them a penalty corner in the 4th minute. Mark Knowles who almost crashed into Mandeep while tackling that gave away a penalty corner. Though Justin Reid-Ross didn't convert in his first attempt, a video referral won them another penalty corner as his flick was obstructed by defender Varun Kumar's foot. Justin Reid-Ross made no mistake in firing the ball away to the post, leaving in-form keeper Tristan Clemons stunned. Going into the first break, Delhi Waveriders enjoyed a 1-0 lead.

The Delhi Waveriders continued their good nick into the second quarter, winning another penalty corner in the 17th minute. This time it was India's most experienced drag flicker Rupinder Pal Singh attempting the flick and he was inch-perfect in sending the ball low and hard to the right corner, beating Clemons and taking their lead to a comfortable 2-0. With only 17 seconds left for the half-time hooter, the home team won their first PC thanks to good stick work by young forward Armaan Qureshi. The opportunity was used to advantage with Mark Gleghorne putting the ball past Vincent Vanasch at lightning speed to close the deficit to 1-2.

Junior World Cup hero Mandeep Singh starred in the third quarter for Delhi Waveriders helping his team extend the lead to 4-1 with his 38th minute field goal. It was brilliant work by Surender Kumar and Niklas Wellen who beat the Jaypee Punjab Warriors' defenders in the striking circle to find Parvinder Singh who selflessly assisted the ball to Mandeep who just had to tap the ball into the goal. This was Mandeep Singh's eighth goal this season. The visitors good run continued when they were awarded a penalty stroke in the 44th minute and Englishman Iain Lewers promptly put the ball past Clemons taking their lead to a formidable 6-1.

It was a herculean task for the home team to come back into the game in the final quarter as Delhi Waveriders' defenders pushed hard to keep the lead. It didn't help the home team's cause when they messed up a penalty corner opportunity in the 49th minute while attempting to convert it to a field goal. Jaypee Punjab Warriors conceded two penalty corners this quarter but an alert Jugraj denied Delhi Waveriders any further lead. (ANI)