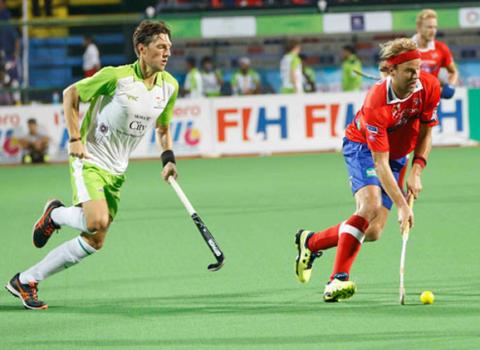 Chandigarh [India], Feb.26 : Table toppers Dabang Mumbai made it to their first ever final in the history of the Hockey India League ( HIL ) with a comfortable 2-0 win against the Delhi Waveriders in the second semi-final clash here last evening.

Dabang Mumbai were on top of their game from the very beginning with better ball possession and circle entries.

Though Delhi Waveriders won their first penalty corner in the opening quarter, their woes with converting them continued. However, Dabang Mumbai were clever to use their penalty corner when they attempted a field goal to ensure a 2-0 lead as a field goal counts for two goals. A perfect set piece saw Robbert Kemperman put the ball past Vincent Vanasch in the 26th minute that set the tone of the match for Dabang Mumbai's win.

Almost immediately Delhi Waveriders earned a brilliant opportunity to equalise when they were awarded a penalty stroke, however, Irishman David Harte who won the FIH Goalkeeper of the Year 2016, was impeccable in his efforts when he swiftly padded away Iain Lewers' strike to deny them an equaliser. Harte was awarded with the `Man of the Match` for his incredible performance on Saturday.

Harte's save was perhaps the clincher for Dabang Mumbai who came up with a tactical defensive structure to keep their lead through the third quarter. Though both teams traded two penalty corners each in this quarter, neither could successfully convert the goal.

The Delhi Waveriders made desperate attempts to come back into the game in the final quarter but a strong defence in Dabang Mumbai led by Harte at the post kept them at bay.

"We are overwhlemed by making it to the Final and more so by how we performed today. We know we played our best hockey and our defensive worked out perfectly. When David Harte saved that penalty stroke it seemed like that was the key," stated Florian Fuchs on winning the semi-final.

The final match will be held between Kalinga Lancers and Dabang Mumbai and interestingly both teams will be led by German skippers Moritz Fuerste and Florian Fuchs respectively.

In the 3rd and 4th Placing match, Uttar Pradesh Wizards will take on Delhi Waveriders. (ANI)