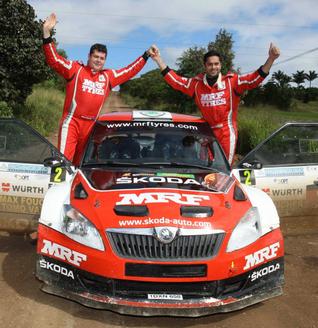 Noumea, May 15 : Gaurav Gill and co-driver Glenn Macneall will be looking to achieve a hat-trick of wins in the Rallye New Caledonia, the second round of the 2014 FIA Asia Pacific Rally Championship to be run here this weekend.

Driving Team MRF's Skoda Fabia S2000, Gill, who last year became the first Indian to win the APRC title, has enjoyed a good start to the new season with a win in New Zealand last month ahead of team-mate and European champion Jan Kopecky (co-driver Pavel Dresler) who also does development work for Skoda.

Having won here the previous two years, Gill knows the stages well. In a recent interview, he commented that his driving has become more refined over recent seasons.

However, while Gill will be brimming with confidence, Kopecky, in his debut APRC season, will have a steep learning curve ahead of him as he starts the rally for the first time.

That should not bother him too much though. The Czech star led in New Zealand after the first day, and it was only a big attack from Gill on day two that relegated him to second place.

Team MRF boss, Lane Heenan, expected his drivers to once again be the pace setters this weekend, as was the case in New Zealand.

"As a team, we've been running the APRC for several seasons now and we have things running very smoothly," Heenan said. "The Skoda Fabia S2000 is a great car and has proved perfect for this championship, as have the MRF tyres that the cars run."

"Gaurav won in New Caledonia last year, but we saw in New Zealand that Jan can be extremely competitive right from the very first stage, so we're expecting another good battle between our two drivers this weekend. It's going to be another exciting rally."

The Rallye New Caledonia comprises 700 km with 235 km of Special Stages. The competitors will tackle 17 stages, the longest being the 17.10 km 'Paita' test, which will be run three times.

The rally is run north of the city of Noumea with road conditions traditionally proving challenging, particularly if the weather is wet.(IANS)