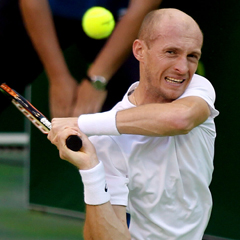 Davydenko, ranked 44th in the world, reached his third final in Qatar in the last four years and his first final since winning in Munich in May 2011.

"Physically I was strong. My concentration was good," said Davydenko on the ATP website after Friday's victory.

"I fought for every point. Second set was a little bit tougher. I would like to beat everybody who is in the Top 10. It doesn't matter if I'm not there."

In the search for his 22nd ATP title, the 31-year-old Russian will face second seed Richard Gasquet of France, who ended an improbable run for German qualifier Daniel Brands with a 7-5, 7-5 win.

"I will try to do my best," Gasquet said.

"I don't know what I can do this year. But in every match, I will try to fight, I will try to prepare better for the Grand Slams and win some tournaments. To start in Doha with the final is important."

The $1 million Doha tournament is a warm-up event for the Australian Open later this month. (IANS)