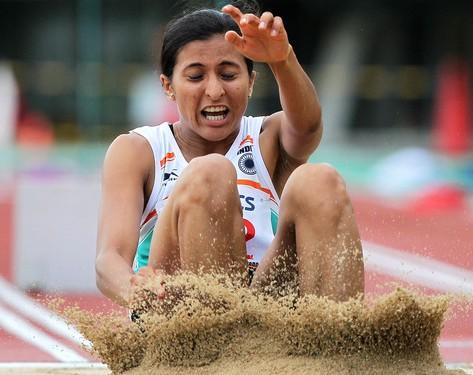 Mayookha controlled the long jump competition from the very outset and finished on top of the podium with a leap of 6.35m, an effort that propelled her to India's first Asian indoor title in the event.

Bui Thi Thu Thao of Vietnam took the silver with a 6.30m jump while Olga Rypakova of Kazakhstan finished third with an effort of
6.22m.

"Winning in Doha made me really happy, especially since I'm not used to competing indoors. However, I expected something better than 6.35m. But I'm not complaining at all.

The Asian title is quite an achievement," said Mayookha after winning the gold.

Another Indian, M A Prajusha finished fifth with a jump of 6.15m.

Dutee, meanwhile, won a bronze in women's 60m dash with a time of 7.37 secs in the final. Earlier, she had set a national record while winning her heats in 7.28 secs.

Viktoriya Zyabkina of Kazakhstan overcame a sluggish start to win the final race in a Championship record of 7.27 secs, well clear of China's Yuan Qiqi (7.33 secs).

Sugandha Kumari brought the third medal for India as she won a bronze in women's 1500m with a time of 4:29.06.

In women's pentathlon, Swapna Burman was at second spot after three events with 3285 points. She finished second in the first event of 60m hurdles, clocking 8.85 secs. She then finished third in shot put with a best throw of 11.38m before clearing 5.74m in long jump.(PTI)