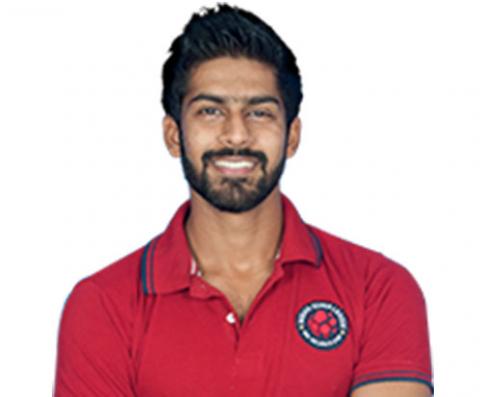 New Delhi [India], Apr 29 : Settling in Aizawl would be the last option for a Mumbaikar, who feels more comfortable in travelling from Malad to Bandra and toiling hard at the Cooperage ground before unwinding himself with maybe a stroll down the Marine Drive.

But Ashutosh Mehta, the stocky defender from 'Amchi Mumbai', is desperate to write a chapter in his Football career with Aizawl FC.

"Before coming down to Aizawl we were aware of the fact that it was going to be difficult. It was very difficult in the beginning because everything is so different here -- the weather, food, lifestyle everything. But, eventually, the people made us comfortable and made us feel at home away from home," he stated.

He added, "The local Mizo teammates connected well which helped me a lot."

On being asked how it has been without the Bada Pao, he exuded, "It's always good when Football takes you places to experience new things. It has been an amazing journey until now with Aizawl FC."

The flamboyant defender, will nevertheless, won't be able to don the Club jersey on the D-day against Shillong Lajong FC as he stays suspended after having received four yellow cards.

"It hurts, hurts a lot. It has come at the worst time. I am just biting my hands and nails," he paused.

"But I will be the 12th man cheering from the stands. I will cheer for my Club and my teammates for entire 90 minutes, arguably most important 90 minutes for Aizawl FC."

"The Lajong game is most important game of the season. We'll do everything to become the champions. I think the Mizo community deserves this silverware more than anyone else," Ashutosh opined.

"If you ever want to believe what Football madness is, come here," he added. Maybe, it's just the beginning.

Aizawl FC will take on Shillong Lajong FC in their next I-League clash at Jawaharlal Nehru Stadium tomorrow.(ANI)