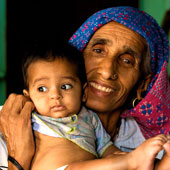 Jind (Haryana), Nov 27: Fifty-five years after her marriage, Rajo Devi last year became the world's oldest mother at 69. As she and her 73-year-old husband proudly celebrated their daughter's first birthday Friday, she said she was ready to have a second child.

Rajo Devi had given birth to a healthy girl Nov 27, 2008, after undergoing an in-vitro fertility (IVF) treatment. The girl was named Naveen Lohan.

"We are very happy today and we had faced no trouble during the last one year while taking care of our daughter. She is equivalent to any boy and our large joint family is proving great help as every time there is somebody free to look after her," she said.

Rajo Devi was married to Bala Ram, 73, at the age of 15, but the couple had to wait for 55 long years for their first child.

"We have planned to organise 'jalwa' (1st birthday function) tomorrow (Saturday) in our village Alewa - a ceremony that is held only for a male child in Haryana. I have no trouble with my first child and I am even ready to have a second one," she said.

Ram, who was 17 when he got married to Rajo Devi, wants his daughter to become doctor or a pilot.

"She is God's gift for us... we would provide her best possible facilities in the forthcoming years. She would have full freedom and can adopt any career of her choice, but I personally want her to become a doctor or a pilot," he said.

After facing social stigma of being childless, the couple approached the national fertility centre, in Haryana's Hisar town last year and the centre helped them realise their dream to have a child.(IANS)