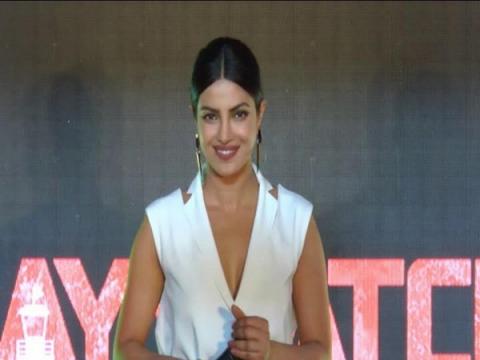 Mumbai (Maharashtra) [India], April 27 : Starting the promotions of her maiden Hollywood film 'Baywatch' from India, Global icon Priyanka Chopra said after some amazing scripts, she chose 'Baywatch' as it is a big global movie and playing the character of a villain was something she found challenging.

While talking to the media, the actress said she always tried to make her career on the different path and playing villain was exciting.

"People didn't know me well, the kind of stories that came to me were quite interesting because of 'Quantico'. After Quantico, it was really nice that I got some amazing films. Out of the films that were offered, I liked Baywatch the most because one - it was huge big global movie and I was a Baywatch fan, when I was growing up and second - I was playing the villain in the film," said the 34-year-old.

"So I liked the idea that in my first film, I'm doing something different. I have always tried to make my career little bit on the left on a different path, that's what excited me. And after Alex Parrish, I wanted America to have something completely different. Alex was such a positive character, so completely bad was really fun," she added.

The trailer of ' Baywatch' introduces us to Victoria Leeds, the owner of a club by the beach, who also happens to run a drug business of sorts that brings all the trouble and mayhem to otherwise peaceful bay.

Armed with more than just a gun, the 'Quantico' star uses her sass and alluring nature to work her way through the only people raining on her parade- a team of "elite" lifeguards.