Sylvester Stallone continues to film in Atlanta despite coronavirus outbreak

Despite several other production companies halting their shooting, American actor Sylvester Stallone continues to film for his upcoming movie amid the coronavirus scare.

Will meet Sylvester Stallone as a true fan: Hrithik Roshan 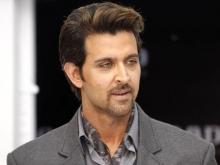 Mumbai, April 14 : Hrithik Roshan says living Hollywood legend Sylvester Stallone is his inspiration and the Bollywood actor will only meet him as a "true fan" and not as a star.

Hrithik, who often indulges in a conversation with his fans and well-wishers on Twitter, was asked by a Twitter user about who inspires the "Bang Bang!" star the most.

The 42-year-old actor quickly replied to the user saying: "Sylvester Stallone the only person I will meet as a true fan."

New Delhi, April 11 : Have you ever thought of saree-clad Charlie's Angel or Hulk in a 'Kathakali' dance make up? So here are the 'Sanskaari' posters of the Hollywood super-hits photoshopped by comedy collective ' All India Bakchod' which will surely amaze you!

AIB has come up with a bunch of fake movie posters called 'Sanskari Hollywood Posters,' a complete pun on the word 'Sanskaari.'

Washington, D.C., Jan. 11 : Sylvester Stallone's speech for 'best performance in a supporting role in a motion picture' at the Golden Globes brought him under real trouble as he missed to thank a big one or two.

As soon as the actor accepted his award, a few familiar faces thought he missed mentioning some pretty important co-stars and co-workers, reports E! Online.

"#waitwaitwait, Ryan Coogler and Michael B Jordan, Thanks for acting with me!!!", Samuel L.Jackson wrote on Twitter within sometime.