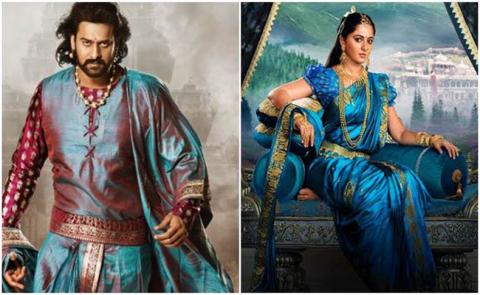 New Delhi [India], Apr 26 : 'Baahubali : The Conclusion' is all set to hit theatres in a couple of days and to hype up the curiosity among the audiences, the makers have unveiled new posters of Prabhas and Anushka Shetty, in their respective characters.

The official Twitter handle of the movie shared a snap of Anushka aka Devasena and captioned the photo, "Be ready to witness the princess of Kuntala, Devasena in 2 days! #Baahubali2."

In the picture, the 35-year-old-actress can be seen wearing an elegant blue saree, decked up with gold jewellery, sitting on a couch totally looking like a queen.

Earlier, the makers also shared a poster of Prabhas as Amarendra Baahubali on the microblogging site.

They captioned the picture, "Amarendra Baahubali Arriving in 3 Days ... #Baahubali2.

The picture sees Prabhas, walking with all his might, in royal avatar.

The movie will also be released in multiple languages like Telugu, Hindi, Tamil, Malayalam.

' Baahubali 2: The Conclusion,' helmed by SS Rajamouli, will hit screens on April 28, this year.