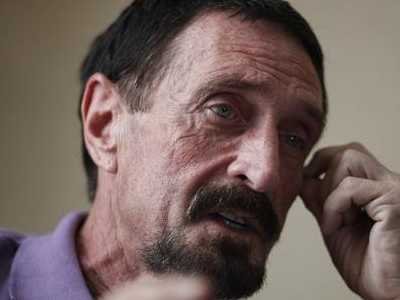 Software millionaire John McAfee, who was arrested by the Guatemala immigration police on Wednesday, has been taken back to an immigration detention cell in the Central American country after emergency hospitalization. McAfee was earlier rushed to Guatemala City hospital in an ambulance, following complaints of chest pain.

67-year-old McAfee has been on the run from Belizean police since his neighbor, Greg Faull, was shot dead on November 10. He may be deported back to Belize because the authorities want to interrogate him in connection with Faull's murder.

When he was absconding for three weeks before his arrest by the Guatemala immigration police, McAfee had hid in a number of places, disguised himself as a handicapped person, and colored his hair seven times.

After being arrested, McAfee was confined to an immigration detention cell in Guatemala, and had to be rushed to the hospital in an emergency, when he was reportedly found lying face down and unresponsive in his cell; raising concerns that he had probably suffered a heart attack.

However, after the doctors at the hospital ruled out the heart attack possibility, McAfee was returned to the immigration detention center. About his return to the detention cell within hours of the emergency, the hospital authorities told ABC News that they did not find any reason for keeping him at the hospital overnight.