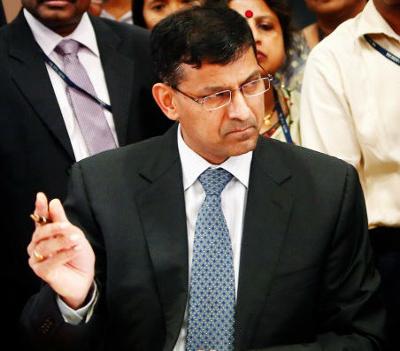 New Delhi, Sep 22 : When Raghuram Rajan moved to Mint Street in Mumbai earlier this month, expectations were high that he would ease the monetary policy to support growth.

Contrary to expectations, Rajan hiked the key policy interest rate in his debut policy review announced just a fortnight after he took charge as the Reserve Bank of India governor Sep 4. Rajan termed the situation "worrisome" and said headline inflation would remain much higher than the earlier projection in the absence of an "appropriate policy response."

The RBI has been fighting against inflation for nearly three years without much success.

Rajan's predecessor Duvvuri Subbarao was often criticised as "hawkish" for maintaining a tight monetary policy post the 2008-09 global financial crisis, despite the slowdown in economic growth.

Inflation gradually declined from the second half of the last financial year and fell below five percent in April, the first month of the current fiscal 2013-14. The headline inflation had come within the comfort zone of the RBI for the first time in more than three years.

Inflation remained below five percent in May and June. But it accelerated to a six-month high of 6.1 percent in August. The more worrying was food inflation that surged to 18.18 percent, the highest level in nearly three years.

Kuntal Sur, director, KPMG in India, said Rajan's debut monetary policy was in tune with the policies of his predecessor Subbarao, where the focus was on controlling inflation.

"The RBI has given priority to controlling inflation," Sur said.

"The governor has stuck to his mandate of managing the monetary risks which continue to be highly prone to inflationary and currency devaluation risks," said Sanjay Dutt, executive managing director for South Asia at Cushman & Wakefield.

It's not just the August inflation data, but what is worrying more the economic policymakers, including the RBI, is the inflation expectations.

Most analysts feel inflation would worsen in the coming months led by food and fuel price rise.

"We hope inflation will cross seven percent in October. It will remain at elevated level in the subsequent months also," Arun Singh, senior economist at Dun & Bradstreet, told IANS.

Singh said the RBI would not help much in controlling the inflation as prices of primary articles were rising due to structural problems in the economy.

"There has been an upward pressure on inflation, but this is largely due to the spikes seen in prices of food articles. Dealing with such inflation calls for structural changes in the supply chain of food products as well as improving productivity through higher agri-investments," said Naina Lal Kidwai, president of FICCI.

Chairman and managing director of Angel Broking Dinesh Thakkar said the RBI is today more worried about the inflationary pressure than it was a couple of months back.

"There are some near-term respites but the worries on inflation and growth strike a note of caution for the outlook for cyclical sectors in the economy," Thakkar said.

"Going forward, the direction of exchange rates, export growth, investment rate in the economy and the inflation and growth expectations will continue to play a role in the overall outlook for markets," he said. (IANS)