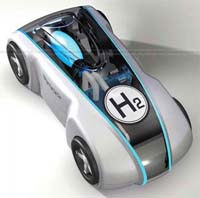 Washington, March 1 : Engineers at the Georgia Institute of Technology in US are speculating on an idea to make a hydrogen-fueled car that separates and stores carbon dioxide until it can be sequestered.

According to a report in ENN, the idea is to develop a zero-emission, hydrogen-powered car that would separate carbon dioxide from liquid fuel and gather it for sequestration underground or in the ocean.

Further down the line, the scientists envision transforming that captured CO2 into more fuel, creating a sort of cycle.

Georgia Tech's hydrogen-powered car would hold the carbon dioxide until it could be deposited at a fueling station. The CO2 then would be transferred to some sort of sequestering station.

"Presently, we have an unsustainable carbon-based economy with several severe limitations, including a limited supply of fossil fuels, high cost and carbon-dioxide pollution," said Andrei Fedorov, associate professor in the Woodruff School of Mechanical Engineering at Georgia Tech and a lead researcher on the project.

According to Fedorov, "We wanted to create a practical and sustainable energy strategy for automobiles that could solve each of those limitations, eventually using renewable energy sources and in an environmentally conscious way." (ANI)