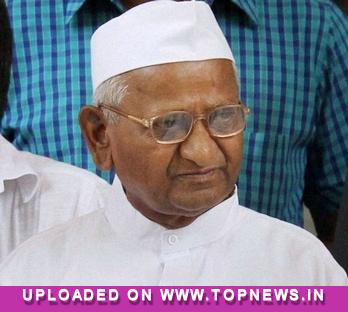 New Delhi, Feb 1 : Accusing the government of going back on its assurances to give a strong Lokpal Bill, anti-corruption activist Anna Hazare on Friday threatened to start another country-wide agitation to achieve his demand of a pro-people Jan Lokpal.

Slamming the government Lokpal draft, Hazare took on Prime Minister Manmohan Singh and UPA Chairperson Sonia Gandhi and accused them of not fulfilling the promises made to him, while addressing reporters at Constitution Club in the Capital.

Reiterating his demand to bring lower bureaucracy within the Lokpal''s jurisdiction and to make investigative agencies like CBI, CVC independent like the Election Commission, Hazare said the draft cleared by the Union Cabinet would make for a ''toothless'' Lokpal.

"As long as the officers of Class I, II, III and IV are not made accountable, the poor people of the country will suffer. Investigative agencies like the CBI and the CVC must be brought out of the government clutches to ensure a free and fare inquiry into scams like 2G and CWG etc," said Hazare.

"If the CBI were independent, ministers like P. Chidambaram would have been behind bars," he added.

Earlier, on Thursday, the Union Cabinet cleared the draft of the much-awaited Lokpal Bill, accepting 14 out of 16 suggestions made by the Rajya Sabha's Select Committee. (ANI)