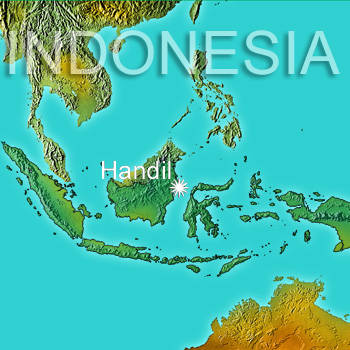 Manado, Indonesia - At the first-ever World Ocean Conference held on Indonesia's Sulawesi island this week, the devastating effects of climate change on the seas are the focus of international attention.

The survival of millions of costal residents is at stake - they are endangered by rising sea levels, increasing salinity of the oceans and decimated fish stocks.

Scientists, politicians and environmentalists paint a dire picture. But one group is conspicuously absent at the gathering of 5,000 experts from 80 nations - the world's coastal dwellers, islanders and fishermen - the groups affected most by the maritime changes.

Odd - as the people whose future is most at stake live right at the conference venue's doorstep. Manado has more than 600,000 inhabitants, all of them living on the coast, many of them fishermen.

Two activists were arrested Monday when they, together with 200 fishermen, tried to get the conference participant's attention. More than one dozen participants from the Philippines were deported.

"This event is organized for government officials only," said conference chairman Eddy Pratomo, Indonesia's ambassador to Germany. "We want a common understanding between ministers, and in due course we want to invite also people affected by climate change."

The opinions of fishermen and costal dwellers do not sit well with the Indonesian government's view.

"Fisherfolks are punished in the name of conservation, but the problems are caused by others," Berry Nahdian Furqon, head of the Walhi environmental forum, told the German Press Agency dpa shortly before he was arrested.

He referred to an extension of maritime safety zones where fishing is banned. The fishermen are usually the last ones to be informed about those changes, he said.

Indonesia, with broad international support, is pushing this extension towards 10 million hectares by 2010.

"Now it seems to be only about quantity, not quality of conservation," said Riza Damanik of KIARA, an advocacy group for the rights of small-scale fisherfolk.

"If you talk about climate change you cannot be silent on pollution that is released in the sea by mining companies for example, or about oil and gas exploration, or sedimentation from cutting the forests or overfishing," Damanik said.

Also, the problem of unregulated fishing by often foreign fishing fleets has to be stopped, he says. According to him, Indonesia is losing 20 to 50 per cent of its annual catch that way.

Such topics are too hot for the Indonesian government. Reining in mining companies could endanger tax gains and investment. If law enforcement goes after illegal fishing fleets too rigorously some high-level politicians who are involved in commercial fishing could be caught in the net.

Fisheries Minister Freddy Numberi talked about the fate of poor coastal dwellers affected by rising sea levels. Indonesian scientists fear that about 2,000 of the archipelago nation's 17,000 islands could be lost 20 years from now.

But at the conference, his main drive goes into a different direction. "Oceans should be given credit for their role in absorbing carbon dioxide, similar to forests," he said. "Indonesian oceans can absorb 25 million tons of CO2 every year."

It's all about money. Rich countries should pay for island nations like Indonesia to look after those valuable CO2 sinks, according to experts at the conference.

In their draft of the Manado Declaration, Indonesia's delegation included a passage seeking to ask UN bodies to "consider including the provision of funding for integrated coastal and ocean management in the context of climate change," a phrasing which was vetoed by many industrialized countries.