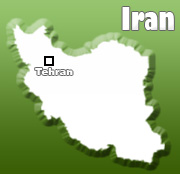 Tehran/Dubai - The hundreds of dhows - rough sea-going vessels in the traditional Arab style - lined up along the port in Dubai Creek are a testament to a very old, but still vital, trade route: Dubai to Iran.

In the early morning, sunburnt Iranian merchants can be seen piling the wooden ships high with sanctions-busting Western-made merchandise bound for the ports of Bushehr and Bandar Abbas.

Bilateral trade between Iran and the United Arab Emirates in 2008 stood at about 12 billion dollars, of which 2 million dollars were Iranian exports and the rest imports from the UAE, according to Hossein Soltani-Nia, an advisor to Iran's commerce ministry.

And on land, in the last few years as Dubai's growth has exploded, the city has become a haven for the more groomed kind of Iranian businessman, escaping the strangulations that the UN sanctions - laid down because of Iran's contested nuclear activities - cause on economic life at home.

There are an estimated 400,000 Iranians living in the UAE - almost 10 per cent of the whole sheikhdom's population - and about 10,000 Iranian firms operate in Dubai.

However, according to Iran-Dubai trade experts, at least 30 per cent of the Iranian businessmen have withdrawn their activities in Dubai and returned to Iran after the Dubai property bubble burst and the knock-on effects of the global economic crisis hit the Gulf.

The statistic is not official, but several members of Iran-Dubai business circles in Tehran told the German Press Agency dpa that they see the percentage as realistic.

"The UAE economy is too dependent on the US, therefore both sanctions and the global crisis are a warning signal for us Iranians to reconsider our business activities in Dubai," said Akbar, who asked for his full name to be withheld.

The United Nations Security Council has so far imposed three resolutions, including financial sanctions, against Iran due to Tehran's refusal to stop or at least suspend its controversial nuclear programme.

The US has repeatedly applied pressure to its ally, the UAE, to monitor Iranian business activities and particularly Iranian banks, operating in the emirate.

The UAE has so far acted moderately, neither ignoring the US cautions nor totally dropping business with Iran.

"Regarding the sanctions, there has always been a way to bypass them," said an Iranian broker who managed bank affairs for Iranian businessmen via locals.

"But the risks of both sanctions and crisis together were too much for Iranians to be able to go on," he added.

According to Mortzea, an economic expert in Tehran with links to Dubai who also asked for his full name to be withheld, a large number of Iranians without deep roots or heavy bank loans in the UAE have already withdrawn their business and returned to Iran.

One of the businessmen is Akbar, who had a shop in one of Dubai's many shopping malls - which he sold and returned to Tehran.

"First we lost some money in real estate and then we faced increasing hurdles due to the sanctions. The crisis in the US was then the final reason for me and my family to return to Iran," Akbar said.

Dubai's runaway real estate market burned Iranians just like everyone else when the bubble burst. Non-Emiratis have been able to buy property in Dubai since 2002. Corporate downsizing, speculation and over-supply are now hitting hard.

In the first quarter of 2009, Colliers, a real estate consultancy, said that home prices in Dubai had plunged by some 41 per cent.

"I was doing IT business in Dubai and had a decent turnover every year but then I realized that other Iranians make a 200- or even 300- per-cent profit in real estate and therefore decided to invest part of my capital into that," said the 40-year-old Iranian Mansour, who has lived in Dubai for more than ten years.

Many Iranians inside Iran made the same decision, encouraged by rumours that by buying property in Dubai they could gain long-term residency in the emirate - a rumour which later turned out to be false.

The Iranian embassy in Abu Dhabi began warning citizens that the property market in Dubai would bring neither profit nor residency.

But even with a tightening economic climate, Dubai for Iranians still offers a little room for less serious pursuits.

"Dubai is great whatever we cannot do in Iran, we can do in Dubai," said Parvin, a 38-year-old housewife in Tehran.

"Dubai is part of Iran and over there the Iranians feel themselves like at home," said the spokeswoman of a travel agency in Tehran.(dpa)