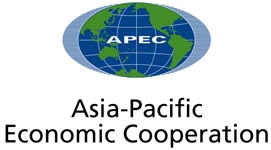 Singapore  - Asian-Pacific leaders on Sunday vowed to work for a strong outcome of the Copenhagen climate talks in three weeks, but failed to give targets for reducing greenhouse gas emissions.

"We reaffirm our commitment to tackle the threat of climate change and work towards an ambitious outcome in Copenhagen," the 21 leaders of the Asia-Pacific Economic Cooperation (APEC) said in a joint statement after their two-day annual summit in Singapore.

But they did not mention any target for slashing emissions, thus backing off from an earlier draft of the declaration.

The draft had included the target of halving emissions by 2050, said Yi Xianliang, an official from the Chinese Foreign Ministry and negotiator for the Copenhagen climate talks.

A 50-per-cent reduction by 2050 "did appear in the draft," he told a news conference on Saturday.

However, as the issue was very controversial, he said the target was omitted from the final version of the declaration following a "collective decision."

"If we had put it in, it might have disrupted the negotiations," Yi said.

Instead, the APEC leaders' statement recalled a declaration of 2007, setting an "APEC-wide aspirational target of reducing energy intensity by at least 25 per cent by 2030."

"We will ensure that efforts to address climate change are consistent with our international trade obligations," said the statement.

Danish Prime Minister Lars Lokke Rasmussen, host of the climate conference, had flown to Singapore overnight for a surprise breakfast meeting with the APEC leaders.

He urged them them to find a minimal consensus on climate talks in the three weeks left before the international conference.

"Even if we may not hammer out the last dots of a legally binding instrument, I do believe a political binding agreement with specific commitment to mitigation and finance provides a strong basis for immediate action in the years to come," he told the leaders, including US President Barack Obama and Chinese President Hu Jintao.

There had been a "general consensus of support" for Rasmussen's proposal, US Deputy National Security Advisor Mike Froman said after the meeting.

"There was an assessment by the leaders that it was unrealistic to expect a full internationally legally binding agreement to be negotiated between now and when Copenhagen starts in 22 days," he said.

APEC consists of the 21 Pacific Rim economies, including the United States and China, the main emitters of greenhouse gases.

Any emission goal set by APEC would be crucial for a global treaty.