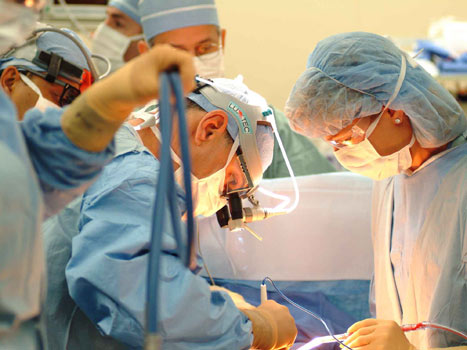 Hilda was diagnosed with Blount’s disease, which is commonly found in Africa and obese children the world over. The disease has an effect on the bone growth of kids and older children. It starts as bow-leggedness that does not show progress in kids aged between 2-4 years.

Hilda’s father Sebastian Okoye, a businessman based in Benin City, Nigeria, got worried about her daughter’s health when she did not straighten her legs even when she turned six.

Hilda’s parents were unwilling to get her girl operated in their native country (Nigeria). So they brought her loving daughter to India as the country has much better healthcare facilities.

In India, Hilda underwent a surgery, which used a new technique, for her bow-legs trouble at a city hospital.

Mr. Atul R Bhaskar, paediatric orthopaedic surgeon who operated on the girl said, “Hilda Okaye, a six-and-a-half-year-old girl, was diagnosed with Blount's Disease in Nigeria. Her father brought her here for correction.”

Dr. Bhaskar also said that Hilda, whose aim is to become a sportsperson, developed bow legs when she was even younger.

"Angular deformities or bow legs are common under the age of two and usually get corrected naturally,'' Dr. Bhaskar said.

During the two and a half hours surgery, which took place on Friday, Dr. Bhaskar and his expert team removed a few millimetres of bone using high speed burrs from the left leg and packed it with bone cement (ceramic cement).

“With this her growth will not get affected and therefore she will not end up with shortening of legs,” Dr. Bhaskar added.

The surgeon also said that Hilda can now realize her dream of becoming an athlete, and take part in activities with her friends and sisters after a few months of physiotherapy, Dr. Bhaskar said.

Blount’s disease is often misdiagnosed as rickets. “If the child continues to have deformity even after two years of age the parents should consult a doctor. However, all bow leggedness cases are not serious and Blount’s disease,” said Dr. Bhaskar.

In India, it is still rarely seen. World over the incidence is one in a lakh children.

“Angular deformities or bow legs are common under the age of two and the condition is usually improves on its own,” said Dr. Bhaskar.